FOCUS ON TECHNOLOGY AND ECONOMY OF THIS MATERIAL

Lead (Pb), as in steels in general, makes brass easy to work (with low fusion point), reduces friction between chip and insert, as well as wear and tear, and finally improves chip control.
Laboratory tests show the characteristics of the materials being examined as the composition of the alloy changes, in particular of lead. 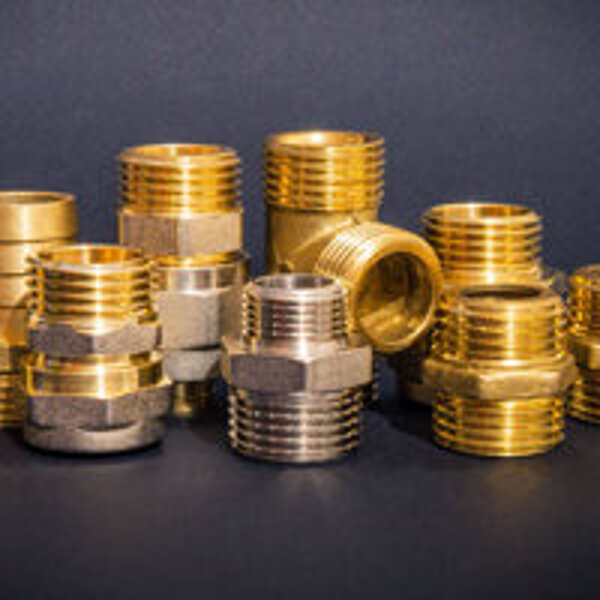 The effects of the reduction of lead

Once the cutting parameters, tool type and cooling lubricant are fixed, the first aspect examined is the one linked to the formation of the chip which, in a high-volume production, may condition its efficiency.
The formation of short chip is optimal in CW614N brass, irrespective of the cutting parameters used.
For those as CW510L and CW511L classified brasses, on the other hand, as the percentage of lead decreases, the chip gets longer, reaching a continuous, tubular shape.
In recent years, new brass alloys have been created containing other alloy elements with the aim of finding an alternative to lead, such as, for example Silicon (Si), Arsenic (As), Carbon, etc.
The most widely-used and most successful alternative is represented by CW724R (Ecobrass), where the presence of Silicon (Si) partially compensates for the absence of lead. This influence is both negative and positive. In fact, Silicon (Si) forms oxide inclusions which result in an increase in wear and tear. The inclusions, however, have a considerable influence on workability, even if they are present in very small percentages in the total composition.

In the same way, through the tests, the Specific cutting force (kc) was obtained, the increase of which, due to greater frictional force in the contact area between the tool and the workpiece, due to the absence of lead, entails the use of greater power, causing high temperatures in the cutting zone which reduce the tool life.
Consequently, the efficiency of the machine, caused by unscheduled shutdowns due to the presence of long chip, is compromised, as is the efficiency of the tools. 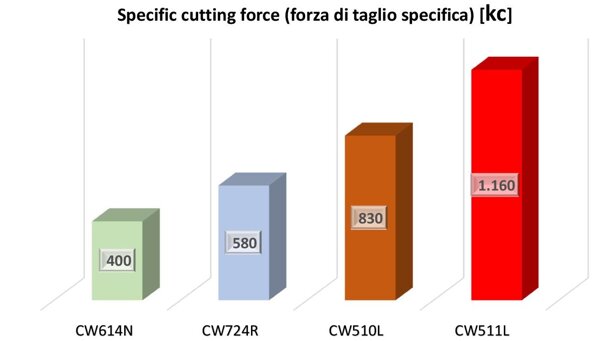 The workability index as a critical reduction factor

When working these materials, some people restrict themselves to only using more powerful machines, which allow relative working, even if not in an optimal way. For making lead-free brass products, (CW511L, CW510L, CW509L, etc.), the ideal approach must necessarily envisage new working technologies, new tools and new mandrels with the right characteristics.
To counteract the abrasive power of the new materials, harder tools are needed which are more resistant to wear and tear. Since they are more fragile, however, they need to be installed on mandrels which enjoy higher rigidity, and possibly on work units with hydraulic vibration damping systems, such as, for example, the Picchi “High performance HPLM” units.
With the gradual increase in the sizes of the chip, the necessary power increases, but production efficiency decreases. Therefore, it is often necessary to manually remove the chip which cannot be evacuated. It is indispensable to reduce the size of the chip and the tool must be reviewed, and when this is not enough, resorting to PRT511 technology is always possible. 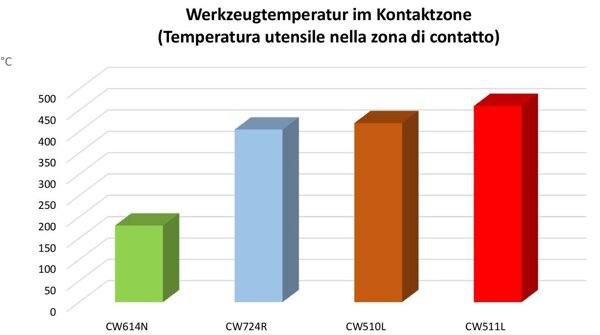 << Back
To download the available documents on our site, please fill in the following Form:
Thank you for registering. Downloads are enabled.

We use cookies to personalize content and ads, to provide social network features and to analyze traffic. We also share information about your use of our site with our social media, advertising and analytics partners who may combine it with other information you have provided to them or that they have collected from your use of their services. If you accept to receive all cookies, click on OK, otherwise click on the settings button and make your selection (the details of the cookies can be seen by clicking on more options).

Profiling cookies are used to track visitors on websites. The intention is to display ads that are relevant and engaging for the individual user and therefore of greater value for third-party publishers and advertisers.